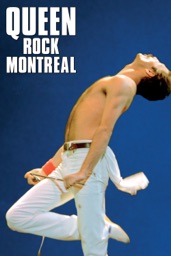 Following their record-breaking South American tour, the Montreal shows on November 24 and 25, 1981 were to be the only concerts by Queen ever shot on film – indeed they were the first group to shoot an entire show in full cinema format 35mm. These releases offer the best ever sound and picture quality on a Queen concert release. Always a great live band, with two years non-stop touring behind them and Freddie Mercury in front of them, Queen excelled themselves with the cameras rolling. The footage has been digitally restored from the original film and the sound has been newly mixed and mastered for DTS Surround Sound and PCM Stereo from the original multi-track tapes.“Hello Montreal...long time no see. You wanna get crazy?” asks Freddie as the band tear into their alternative ‘fast’ version of We Will Rock You, and from there on Queen show their hard rock roots, slowing down only for Love of My Life and the more mid-tempo Under Pressure, notably being performed live for the first time in this concert. The real joy to be had in watching Freddie, Brian, Roger and John performing here is that, unlike any other Queen concert film available, this delivers raw Queen. This is before the Hot Space album, before keyboards would find a place in the band’s touring line up; this is simply four musicians in total cohesion. Originally titled, “We Will Rock You”, this film was first launched at the Cannes Film Festival in May 1983 - as only Queen could. It was then released in North America (September 1984), becoming the first commercially available film of Queen in concert. For this special edition, the picture has been digitally restored from the original 35mm negative.