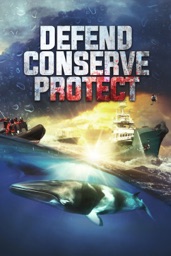 A film about the environment, passion and activism – DEFEND CONSERVE PROTECT follows the marine conservation group, Sea Shepherd, as they challenge the Japanese whaling fleet on the high seas- in an epic battle to defend the majestic Minke whales of the Southern Ocean. At the helm of Sea Shepherd is 28-year old Captain Peter Hammarstedt who carries with him the resolve of Melville's Captain Ahab - only Hammarstedt hunts the whaling ships not the whales – and declares ”you haven’t lived until you’ve found something worth dying for”. Narrated by Dan Aykroyd and featuring Sea Shepherd founder Paul Watson, along with remarkable frontline experiences from the ships.