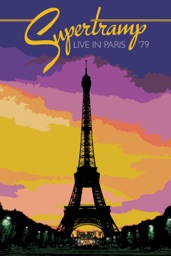 Supertramp’s “Breakfast In America” was the biggest selling album in the world in 1979. It spawned several hit singles and went on to win two Grammy Awards and sell in excess of 20 million copies. Following the album’s release Supertramp embarked on a 10 month world tour which arrived in Paris at the end of November. This show from the Pavillon de Paris was both filmed and recorded. The audio went on to form the basis of the 1980 live album “Paris” but the film was never released. Now for the first time, transferred and restored to full HD from the original 16mm film, this footage is available to Supertramp’s legion of fans worldwide. The sound has been remixed by original sound engineer and co-producer Pete Henderson from the original multi-tracks and can now be heard in 5.1. This is a legendary show by a legendary band performing at their absolute peak and is a must for any Supertramp fan.