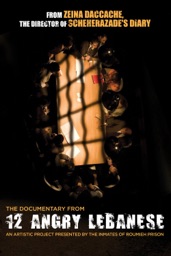 From Zeina Daccache, the acclaimed director of "SCHEHERAZADE'S DIARY" comes another compelling and acclaimed feature doc inspired by the classic "12 Angry Men".

A theatre director specialising in working with disadvantaged and traumatised people, Zeina Daccache struggled to set up Lebanon's first prison-based drama project in the country's notorious Roumieh Prison. For 15 months, 45 inmates, some completely illiterate, found themselves working together to present an adaptation of the famous stage play '12 Angry Men', here re-named '12 Angry Lebanese'. Through their new-found creative outlet, we witness the prisoners coalesce into a slick, professional ensemble. Inspiring and honest, this account of the prisoners' journey demonstrates the positive effect of art therapy and the positive effect on some of the most ostracised individuals in society.