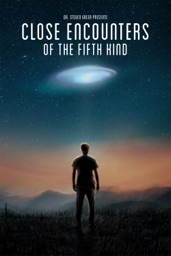 Close Encounters of the Fifth Kind: Contact Has Begun

As UFO’s suddenly grace the covers of the NY Times and Washington Post in the age of “fake news” and #conspiracy memes, how can we make sense of these revelations without losing our grip on reality? “Close Encounters of the Fifth Kind” is a feature documentary presented by Dr. Steven Greer, the global authority on extraterrestrials who created the worldwide disclosure movement and routinely briefs presidents and heads of state on the ET phenomenon. His previous works, Sirius and Unacknowledged, broke crowdfunding records and ignited a grassroots movement. In this film, Dr. Greer presents the most dangerous information that the architects of secrecy don’t want you to know: how forgotten spiritual knowledge holds the key to humans initiating contact with advanced ET civilizations. The film features groundbreaking video and photographic evidence and supporting interviews from prominent figures such as Adam Curry of Princeton’s PEAR Lab; legendary civil rights attorney Daniel Sheehan; and Dr. Russell Targ, who headed the CIA’s top secret remote viewing program. Their message: For thousands of people, contact has begun. This is their story.